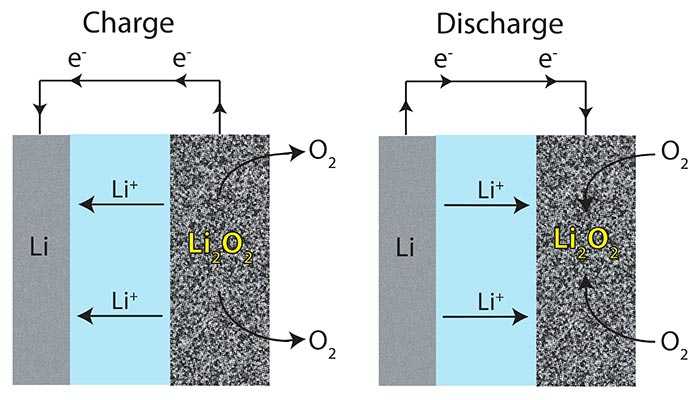 Scientists at Cambridge University have released details of a pioneering new study seeking to advance the design and production of lithium-air batteries which could pave the way for long lasting and ultra-efficient electric cars, smartphones and other rechargeable devices.
Research into battery technology is a rich area currently, with a number of different studies and developments having already been reported by our blog, and the potential of lithium-air batteries which can store energy far more densely than the currently favoured lithium-ion alternatives has been known for a while. All previous attempts to develop such batteries however have come across significant stumbling blocks but the most recent breakthrough at Cambridge seems to be moving towards overcoming these.

The batteries involved in the study lead by Professor Clare Grey have used a spongy graphene electrode and a new chemical reaction to drive the cell in an attempt to achieve greater efficiency and allow for more recharging potential than earlier prototypes. Those developments have shown great potential in Professor Grey’s study and as well as starting to combat those two major issues, this particular study has also taken steps towards developing a lithium-air battery which does use simple air as opposed to pure Oxygen.

As has been the case with previous lithium-air battery prototypes, those involved with the Cambridge University study can store energy far more densely than current lithium-ion cells and in fact very nearly match the energy per kilogram potential of petrol. What this breakthrough has done however, is to twin that high energy density with greater efficiency and the ability to recharge the cells far more reliably and over a longer term.

When it comes to energy efficiency, the new cells of the study have been shown to charge at 3.0 volts and discharge at 2.8 volts, which represents an efficiency of 93%. That is an efficiency close to the current level achieved by lithium-ion batteries and far exceeding that of previous lithium-air cells. These new batteries too, have shown a far greater ability for recharging with the study having proven that they can be charged and recharged more than 2,000 times without effecting their function.
It is that combination of energy density, efficiency and recharging capability that is so interesting about this study therefore, and which has impressed experts in the field. Dr Paul Shearing, a chemical engineer at University College London, for instance has described it as ‘very impressive work’ that represents ‘an important step’ in taking lithium-air technology from theory to practice.

That practice may well manifest itself most impressively in the realm of electric cars with lead author Professor Grey herself stating that ‘It’s the energy density that’s going to make that car battery that gets [from London] to Edinburgh’, but the technology could have wider implications too. A battery with immense energy potential, good efficiency and excellent recharging capability after all, clearly has potential applications in a huge range of rechargeable devices. Excitement must be tempered somewhat however, as the team behind this most recent breakthrough believes that it could still be at least ten years before a commercial version of a lithium-air battery is ready to hit the market.