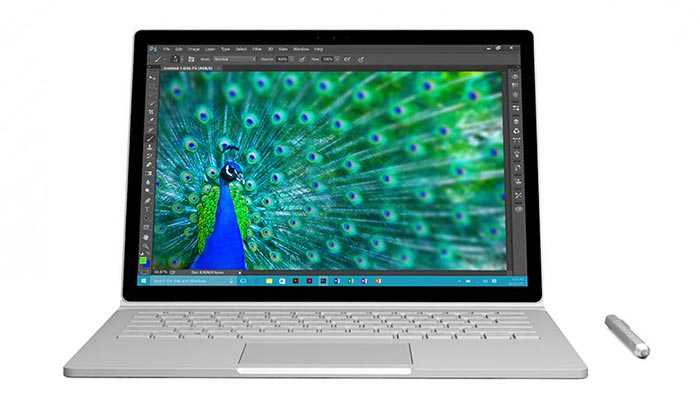 Tech giants Microsoft have made their very first foray into the laptop making arena this week with the launch of the Microsoft Surface Book; a product that the company describes as the “ultimate laptop”.
Hitting US shelves on the 26th October, the 13.5 inch notebook which is named as the thinnest Windows 10 machine ever created, is part of an increasingly large group of hybrid devices where the screen can be removed for use as a standalone tablet. The difference between the Surface Book and other such devices however, is that whilst it is being used as a laptop it has specs that rival those of the top pure laptops on the market.

Surface Book Specifications
The Microsoft Surface Book has a variety of really impressive features, which are arguably headlined by the inclusion of Intel’s sixth generation Core i5 and i7 processors, which give the laptop outstanding processing power and according to Microsoft themselves make the Surface Book a ‘creative workhorse’.
Alongside that processing power, the base configuration of the Surface Book also boasts 8 GB of Ram and a 128 GB solid state drive for memory. What’s more, the 13.5 inch screen is one of the very best around thanks to its high resolution 3,000 by 2,000 display that outshines the offerings of such well thought of notebooks as Apple’s MacBook Pro and iPad Pro offerings.
All of those specs speak to the potential benefits of the Surface Book to businesses and organisations and that is further underlined by both the impressive 12 hour potential battery life of Microsoft’s first laptop and the specially designed trackpad. That glass laminated trackpad is unique within the laptop market, thanks to its five-finger contact recognition which twins with the gesture based controls possible via Windows 10.
As if those specs weren’t enough however, as we’ve already mentioned the Surface Book is a hybrid device and there’s plenty that is interesting about its ‘Clipboard’ mode too.

Clipboard Mode
The first notable thing to mention about the Surface Book’s hybrid capability is that Microsoft describe detaching the screen as creating a ‘portable clipboard’ and this feeds into exactly what the capability is aimed at. That is that it is a mode designed to use OneNote and the Surface Pen for short and business focussed activities as opposed to being for watching movies, playing games or other such leisure pursuits.
The clipboard mode of the Surface Book therefore, really impresses in terms of the continued processing power of the device, its excellent display and intuitive pen usage but is not designed to provide extended battery life in that mode.
That being said however, the hybrid nature of the Surface Book is still impressive both for what it does provide as detailed above and for how the hybridity of the device is achieved. The hinge system of the Surface Book in fact, is nothing short of ingenious and allows for the easy adoption of either the normal laptop mode, the detached clipboard mode or a third position whereby the screen folds around behind the keyboard.

Pricing and Availability
All of that leaves just one thing to discuss, and that is the price point and availability of the Surface Book. In terms of price, the laptop is very much a flagship Microsoft product aimed at illuminating the possibilities provided by Windows 10 and as such the base model started at a lofty $1499 when it hit the market in the US on the 26th October.
That price represents approximately £985 but for any Brits waiting to hear about the launch of the laptop on their side of the Atlantic, it is believed that when this eventually occurs the base configuration option will actually be priced at around £1200.