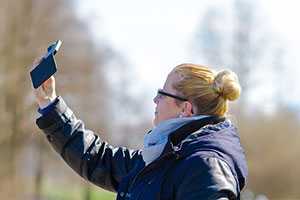 Multinational financial services company Mastercard have announced that this autumn they will test a new smartphone app that uses facial recognition software to help customers verify online purchases. The app asks customers to hold up their phone as if taking a selfie, align their face within a circle on the screen and blink once to verify their online purchases, and the initial test will involve around 500 people in the USA.

Whilst to many people facial recognition may sound like something from science fiction, it is actually not the first time that such technology has been attempted. Google actually investigated the use of facial recognition as an unlocking mechanism for Android phones but were stymied when users discovered that holding a photograph up to the device worked as well as the owner’s actual face – explaining Mastercard’s requirement that users of their app must blink. Chinese giants Alibaba also demonstrated similar software in March of this year but have yet to bring their version to market.

Mastercard’s move to trial their app amongst the American public therefore, is one reason why this story is so interesting and the other is the plans which the company have for the app if the test delivers good results. The company hope that this facial recognition app could prove an alternative to its existing SecureCode software, which asks customers for a password to verify their online purchases. According to Mastercard themselves, SecureCode accounted for three billion transactions last year and as such, any new software that may take over a significant proportion of that activity undoubtedly represents big business.

There are still significant reservations regarding the use of facial recognition for such security measures however, with security researcher at Pen Test Partners Ken Munro verbalising the main misgivings. He claims that ‘there is a case for adding extra layers of security…If an ordinary password gets compromised you can simply revoke or change it. What happens if your facial recognition data gets stolen? You can’t change your face.’

In spite of such criticism and reservations however, Mastercard are demonstrating plenty of confidence in their new app and it’s believed that major firms like Apple, Google, Microsoft and a couple of multi-national banks are also on board and eagerly await the results of the autumn test. What’s more, the President of Enterprise Safety and Security for the company, Ajay Bhalla has demonstrated real excitement and enthusiasm for the app and how it will suit consumers today. He told CNN Money that ‘The new generation which is into selfies…I think they’ll find it cool. They’ll embrace it.’

A technological innovation which is being driven not only by business interests but also by a desire to provide a service that a new generation of consumers will embrace and be excited by therefore, is something that EC-MSP are delighted to see from a multinational like Mastercard. Like many others as a result, we will await news of the Autumn test of this ‘selfie security’ app with expectations abound that positive results in that test may see the app rolled out more widely almost immediately afterwards.