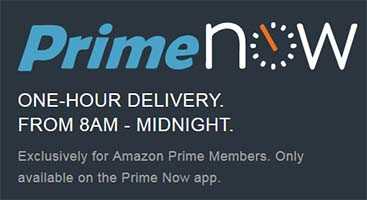 Always keen to cement their reputation for being at the vanguard of technology and innovation, Amazon have this week launched their ‘Prime Now’ service which offers one-hour delivery for Prime members in parts of Central London.

To take advantage of the speedy delivery, customers must be Amazon Prime members, place an order totalling at least £20 and then pay the extra £6.99 charge for delivery within the hour. The service does also however, offer delivery within a two hour window for no additional cost between 08.00 and 00.00, seven days a week as an enhancement of the standard Prime service which provides free same day or one day postage on products sold by Amazon.

The newly launched Prime Now service is not all about quicker delivery however, and also has an interesting selection of other features beyond the one-hour delivery service. Prime Now customers can for example choose to tip their delivery driver through the Prime Now app, with a default amount able to be either increased or decreased and all proceeds reaching the individual drivers according to Amazon. Those drivers can also be tracked by customers via the app adding to Prime Now’s appeal for users who need rapid and reliable delivery of items from the 27 Amazon departments currently covered by the service.

Having only just been launched, the service does currently cater for only parts of central London but Amazon UK’s managing director Christopher North is bullish about the company’s plans to expand. Speaking about the launch this week, North claimed that ‘this is just the beginning…London is our first Prime Now city in the UK and we are already working on making Prime Now available in more post codes in London and beyond.’ It is believed in fact, that the expansion work he spoke of will see Prime Now reach all of London and a handful of other UK cities as soon as the end of this year.

That roll-out plan for Prime Now in the UK would match Amazon’s course of action in the states, which saw the service launched first in New York last December before being extended to other cities including Miami and Dallas in the following months. Whether the service will prove a success however, is by no means assured at this early stage and a test carried out by the Guardian newspaper raised some doubts in this regard.

When attempting to utilise the newly launched service this week, the newspaper reported several glitches within the online ordering process, more limited availability than advertised and a failure to deliver on time. Such an innovative and adventurous service however, was always going to encounter teething problems but that does not mean that Prime Now will not become a really beneficial product for individuals and businesses alike.

As part of Amazon’s ongoing policy of utilising technology and IT innovation to better serve customers and grow their profits, Prime Now could well develop into an invaluable service for users in the UK. Many business and individuals after all, could get themselves out of some tricky situations with one-hour delivery and as an example of an exciting and innovation development within the IT sector, we at EC-MSP will be watching Prime Now’s development in the UK with interest.