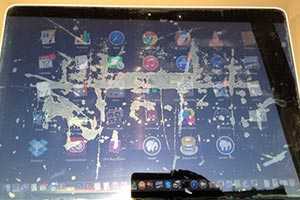 An increasing number of Apple MacBook users are campaigning for action from the tech giants, in response to reported issues with the retina screens of the laptop, which some claim have been in evidence for a number of years.
MacBook customers have been taking to the internet and social media to describe and document spots and patches forming and then on some occasions spreading to become ‘horrific stains’ behind the anti-reflective retina screens of their laptops. Such has been the gathering momentum of the so-called ‘Staingate’ controversy in fact, the aggrieved customers have even set up their own website.

‘Staingate.org’
The ‘Staingate.org’ website set up by the angry MacBook owners has been in existence since the early part of this year and as of the 13th July claims to have a database of 2969 customers who are described as having ‘paid more than 2000 USD/EUR for a MacBook that is showing horrific stains in the screen.’ As well as featuring an extensive gallery of products displaying the issues described, the site also goes on to explain that ‘the stains can start as early as seven months after the purchase. There is no clear pattern as to how it starts: some experience it in small spots around the edge, on other screens it appears in the middle as large patches.’
Beyond simply griping about the issues themselves however, the disgruntled Apple users behind the ‘Staingate.org’ site also have some choice words for the company. They believe that ‘Apple hasn’t responded accordingly to this problem and have told us that this is a [sic] “cosmetic damage and it is not covered by the warranty”, which is a response that the site claim lead to repair costs of around 800 USD/EUR. In light of this, the ‘Staingate’ campaign is requesting ‘a free repair program for all the MacBooks having this problem, without taking into consideration if it is under warranty or AppleCare’.
Their campaign may soon take to the courts too, with lawyers Whitfield, Bryson & Mason apparently collecting details for ‘potential legal action against Apple related to Staingate’ but the issue has failed to yet draw much of a response from Apple.

Apple’s Response
Apple themselves have had little to say on the subject of ‘Staingate’ and have not confirmed the existence of an issue or offered any suggestion as to a potential cause. Instead, a spokesman for the firm simply told the BBC that ‘customers who experience problems with their Apple products should contact Applecare’.
If there were such a significant issue with one of their products, it would be unusual for Apple not to get ahead of the issue, having frequently in the past offered impressive customers service solutions to similar issues with products like the iPhone 4. This may suggest therefore, that the screen issues are not as a result of an inherent problem with the product and a number of other suggestions such as the effect of third party cleaning supplies have been posited as potential alternative causes.
Whatever the ultimate result of the ‘Staingate’ controversy however, what all of the publicity surrounding it should really drive home is the importance of good IT support to customers the world over.