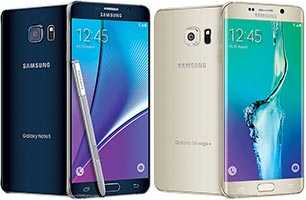 In a surprisingly timed announcement, Samsung used a press conference in New York this week to herald the arrival of two new “phablet”-sized Android handsets, in the shape of the Galaxy S6 Edge + and the Galaxy Note 5.

The New York press conference also served as the platform for Samsung to announce that Samsung Pay – their ‘smart wallet’ service which allows phones to trigger payment card transactions – would go live in South Korea this month before a global rollout, but it was the announcement of the two new phones which captured most of the headlines.

Both handsets, which follow an increasingly popular trend for smartphone manufacturers to offer options somewhere between a traditional phone and a tablet in size, feature 5.7 inch (14.5cm screens) and also include a number of other features to make them potentially great handsets for business use.

Alongside the more scratch resistant screen, which is a full 0.6 inches (1.5cm) larger than that of the earlier addition of the handset, the Galaxy S6 Edge + has also been given an extra gigabyte of memory to take the total to an impressive 4GB of Ram. This is expected to make the handset far more suitable for multi-tasking, in spite of the continued use of the same in-house Exynos processor.

In a similar vein, the Galaxy Note 5 has upgraded to 4GB of ram and like other Note editions also includes a stylus to make the handset even more suitable for productivity tasks and other business related activity. On top of that, the Note 5 has also been given metal edges and a glass back for what the company describe as a ‘more premium feel’ and what is undoubtedly a more elegant look.

Any businesses or individuals in Europe who might be excited about potentially getting their hands on these phones however, will have to temper their enthusiasm somewhat as only the Galaxy S6 Edge + is going to be made available on these shores. The choice to limit the Note 5 to South Korea and the USA has been described as a decision taken for ‘purely marketing reasons’ but some analysts believe it may represent a misstep by the company.

Industry analyst Ian Fogg, from IHS Technology elucidated to the BBC why limiting the availability of the Note 5 might cause Samsung issues, by explaining that ‘one of the risks is that consumers will learn of both products, not be able to buy one of them in certain geographies and then defer their purchase.’

If the fact that the Note 5 is not available in Europe does indeed illicit that consumer response, it will represent a huge problem for Samsung. This is the case as many experts believe that their sole reason for announcing these handsets in August was to get them to market ahead of Apple’s expected announcement of their updated smartphones on 9th September.

Whether the style of their rollout does have that undesired effect and whether the handsets do in practice prove to be significant upgrades for business and individuals alike, we won’t have to wait long to find out, as they will go on sale – in the relevant locales – on Friday of this week (21st August).