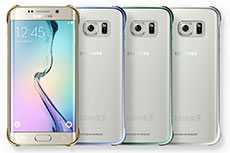 When a company like Samsung announce a release date for a landmark new product it always gets people’s attention, and that was certainly true when they announced the roll-out of their Galaxy S6 and S6 Edge phones on March 1st.

The new phones will be available in the UK and nine other countries from the 10th April but have already got tongues wagging amongst tech enthusiasts thanks to their impressive looking range of features.

What are the Headline Features of the S6 Range?

Samsung have not been backwards in coming forward when it comes to promoting the new and improved features of their upcoming Galaxy S6 and S6 Edge, and when you look at those features closely you can see why.

First and foremost, Samsung have moved away from the plastic construction of older models in favour of using metal and glass for the Galaxy S6 range. This allows the phones to measure just 7mm in thickness but not be in danger of bending, which is a fact that Samsung have been very keen to emphasise in a clear dig at rivals Apple whose issues in that area have been well publicised. Alongside this new style of construction, the Galaxy S6 range of phones also feature a Super AMOLED screen which Samsung are claiming is the best ever smart phone screen thanks to its market leading 577 ppi pixel density.

The processor behind the Galaxy S6 range also represents a step forward from previous models, with the phone being driven by three gigabytes of RAM and an Octa-core Exynos processor which is claimed to be 30% more power-efficient than previous models. It is in the area of power which one finds arguably the most interesting of the Galaxy S6 range’s features too, in the shape of the phone’s battery and charging capabilities.

Charging into the Future?

The element of the new Samsung Galaxy S6 range which might not sound the most glamourous but could easily be the most beneficial is undoubtedly its rapid charging battery with wireless capability. The Galaxy S6 and S6 Edge come complete with a 2,600 mAh battery pack and built-in wireless charging capabilities which together mean that only ten minutes of charging can yield four hours’ worth of normal use or up to two hours’ worth of HD video viewing.

That speed of charging is impressive when considered solely as a stand-alone feature, but the fact that the wireless charging is also far more user-friendly than having to cope with wires and plugs or laptops, adds a further extra dimension. Considering that Samsung have made the battery pack a built-in feature of the Galaxy S6 range, whereas all of their previous phones have had removable batteries, also seems to speak volumes about their own confidence in the new system.

All of that taken into account and considered alongside the fact that Ikea have recently launched their own Home Smart Range of furniture with the same wireless charging technology, Samsung’s Galaxy S6 range might just represent a significant step forward. It might just after all, spell the beginning of the end of one of the last remaining major issues of smart phone use, being that of disappointing battery life and awkward charging.