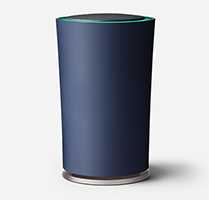 In conjunction with their hardware partner TP-LINK, Google have this week launched a brand new Wi-Fi router in the shape of the ‘OnHub’, which they claim will solve a whole host of the most commonly occurring network issues in the home and small workplaces. Designed to be a smarter and more reliable router than those already on the market, the ‘OnHub’ boasts a whole host of impressive features which are headlined by its more aesthetically pleasing appearance.

That more stylish and easy on the eye look of the ‘OnHub’ is not a simply aesthetic improvement however, as it is also intended to solve a common router efficiency problem which was best explained by Trond Wuellner, the Google Group Product Manager who announced the launch last week. Wuellner claimed that ‘many of us keep our router on the floor and out of sight, where it doesn’t work as well. We replaced unruly cords and blinking lights with antennas and subtle, useful lighting, so you’ll be happy placing OnHub out in the open, where your router performs its best.’

The ‘OnHub’ is not merely a more attractive packaging of a traditional Wi-Fi router however, as the product also boasts a number of other new features and attributes. In order to ensure the fastest and most reliable connection possible, the router has a full 13 antennae included within its body and featured ‘smart software’, which combined to allow the ‘OnHub’ to search for the best channel for the best possible connection when it is set up.

The software will then also run in the background while the router is working, to continually adjust the channel in order to avoid interference and maintain peak performance. That is ideal for busy networks with a number of devices, as is the fact that the router allows users to prioritise some devices to ensure that the most important have the quickest connection possible.

The way in which the ‘OnHub’ router can be managed and controlled too, represents a distinct progression from traditional Wi-Fi routers, as all activity can be governed by the ‘Google On’ smartphone app, which works on both Android and iOS operating systems. That app allows users to monitor how much bandwidth varying devices are using, to run network checks and offers potential solutions if the router encounters issues or problems. What’s more, the app can also reveal the network password quickly and easily, and allow the user to share it via text or email with friends at home or visitors to an office.

The revolutionary router therefore, appears to be another step towards Google’s attempts at producing a so-called ‘smart home’ in the future, and the technology giants are already promising ongoing updates to the ‘OnHub’. The router can and will automatically receive updates and security upgrades when it is online, and Google have promised that further ‘OnHub’ devices from other hardware partners including Asus, are upcoming.

This exciting and intriguing new router which might represent a real step forward for Wi-Fi use in the home and the workplace went on sale last week in the USA and Canada and whilst the UK launch has not yet been announced, it is expected soon.