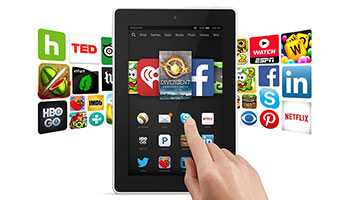 In the past week Amazon have held a product launch which introduced a raft of new and upgraded devices to the market and was headlined by a cut-price tablet costing less than $50. The announcement of the new 7” Fire tablet comes just over a week after the launch of Apple’s high end and expensive iPad Pro tablet and represents a very different product and marketing strategy indeed.

Amazon hold up their new 7” Fire as an example of a low cost version tablet that doesn’t suffer from the poor quality components, short battery life and other common shortcomings of the existing budget alternatives. At the launch in fact, an Amazon demonstrator held up one of the company’s new tablets alongside a Samsung device priced at two times the cost of the 7” Fire to show its ability to display video at a noticeably higher quality. Following that demonstration, the launch also went on to display an iPad Air 2 which had suffered a broken screen after 20 spins in a testing machine, whilst the Fire 7” had managed to survive a full 200 revolutions.

The higher quality but still budget tablet angle for the 7” Fire seems like an obvious appeal to small businesses and organisations who may wish to equip their staff with the device, and Amazon’s ‘buy five, get one free’ promotion is also clearly tailored for the small business market. Last week’s launch wasn’t all about the cut-price tablet however, as a range of other new products for different potential consumers was also premiered.

Alongside the new 7” Fire, Amazon also introduced the world to the latest version of their 10” and 8” Fire HD tablets as well as a brand new Kids’ Edition tablet. The 8” and 10” devices will retail at $149.99 and $229.99 respectively and are noticeably tilted at domestic and leisure use, featuring high quality widescreen displays, a thin and light construction and also being the first ever tablets with Amazon Underground – the company’s own version of an app store. The Kids’ Edition tablet meanwhile is supplied with a hard-wearing construction and case, access to lots of age-appropriate material and a two year guarantee at a retail price of $99.99.

The launch wasn’t all about tablets however, as Amazon also used the event to introduce their updated Fire TV set top box. The box features surround sound audio, 75% more processing power than the previous iteration of the device and most notably allows for access to more ‘4K Ultra HD’ content. That represents the most modern ultra-high definition video content and is a feature that is not included with the recently launched Apple TV device, which interestingly costs close to twice what the Amazon Fire TV set top box will retail at.

A whole host of fascinating products at even more interesting price points are now available from Amazon therefore, but it is the budget 7” Fire that is undoubtedly the most interesting. That device after all, represents a potentially really useful and affordable tool for small business that might just serve to revive what is currently a flagging market for tablets.