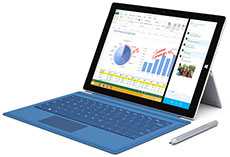 The digital revolution that has impacted so many people’s lives in recent years has undoubtedly been spearheaded by the rise of mobile technology. Smartphones are, of course, the most obvious example here, but the popularity of tablet computers has also rocketed.

The rise to prominence of such devices has had knock-on effects elsewhere in the tech world – most notably sparking a sharp decline in global PC (personal computer) sales. It seems that not everyone is ready to give up their conventional setup for a more compact, touchscreen alternative just yet, however. The International Data Corporation (IDC) predicted recently that laptop sales will actually begin to grow again over the next two years.

It remains to be seen whether laptops will ever be completely pushed aside, but some manufacturers are certainly trying. Microsoft is one example; the firm’s Surface range of devices – particularly the new Surface Pro 3 – is being pushed quite firmly with the tagline “the tablet that can replace your laptop”. Is it really a worthy alternative, though?

A bit of background

The Surface range was introduced in October 2012; the first-generation model being the earliest of its kind to be solely designed and distributed by Microsoft. In the time since, a further four models have been manufactured, all of which have attracted positive feedback from the relevant media outlets. The latest, which was released in May 2014, is the Surface Pro 3.

In its most basic form, the Surface Pro 3, like the models before it, is a tablet computer. It has many of the characteristics present in Apple’s iPad, the Google Nexus range and Samsung’s Galaxy Tab: the most notable of which are an extremely low profile and a high-resolution, capacitive touchscreen. There are, however, a couple of differences – and it’s here where the product starts to dip its toes in laptop waters.

A laptop in tablet’s clothing

The Surface’s most obvious laptop-like feature is undoubtedly a full-scale QWERTY keyboard. Although this part is actually an optional extra, it’s present in most of the product’s promotional shots and is hugely popular among adopters. More than this, though, the device’s insides also work much like a laptop’s.

The consumer market is home to a hugely diverse range of tablet computers these days, but most run on specially designed operating systems, developed with touchscreens and power restrictions in mind.

Microsoft is moving in a slightly different direction with its own efforts. All three of the Surface Pro models run on the full version of Windows 8, as opposed to its mobile iteration, Windows RT.

This is made possible by the inclusion of some impressive hardware. Once again, Satya Nadella’s firm has shunned the usual tablet processor options in favour of something with a little more grunt. Buyers of the Surface Pro 3 get to choose between three of Intel’s best chips – the i3, i5 and i7 – and can support it with either 4GB or 8GB of RAM. These are all specs you’d struggle to find on a conventional tablet.

Put all of the above details together and it’s easy to see why the Surface range has proved popular with both consumers and business users alike since its initial launch. Simply put, it’s a pretty powerful machine that strives to give users the best of both worlds.

As mentioned, the powerful components buried beneath the Surface’s glitzy screen separate it from its main competition in the tablet market. This isn’t just an attempt to get one up on the iPad, though. It gives users the chance to get some real work done, without having to deal with the limitations they may encounter on a more traditional slate. It means that more demanding applications, like those that make up Adobe’s creative suite, can be used on the go.

This impressive capability is of course helped massively by the attachable keyboard – something that anyone who has tried to write a lengthy report on a touchscreen will appreciate. While similar features exist for the Surface Pro’s biggest competitors, most seem like afterthoughts designed to cater for specific apps. This really isn’t the case with Microsoft’s device.

Don’t ditch your laptop just yet…

You can’t deny that Microsoft’s attempts to merge tablet and laptop are ambitious, and there are signs of compromise to consider before investing.

The device’s kickstand mechanism – while conducive to its portability – isn’t quite as robust and easy to operate as the movement you’d find on a normal notebook, for example. Despite offering a number of pre-set positions, it will never quite be able to match the flexibility of a clamshell design when it comes to viewing positions.

The keyboard itself might also be enough to put some people off, not least because it costs about as much as a Kindle Fire (around £132) to add. Simply put, it’s not as comfortable, quiet or easy to use as a standard laptop keyboard, meaning it may not be the best option for working over a long period of time. The same can be said for the touchpad, which is around an inch smaller than the one present on Apple’s MacBook Air, which is actually a more compact device on the whole.

At around £900 for the basic model (64GB HD, Intel i3 processor and 4GB RAM) and a keyboard cover, it’s not exactly the cheapest option on the market either. Apple’s more powerful (i5 processor) 11-inch MacBook Air is the same price, and you’ll find even better value from most of the major Windows laptop manufacturers.

It’s clear that Microsoft’s Surface Pro 3 has a lot to offer. It has everything you could want in a tablet computer, and many of the things you’d look for in a laptop. At the very least, this makes it unique, and there’s definitely a market for it. At present, though, there are still numerous gaps to be bridged between the two device types. These are seemingly being addressed with the release of each new model, but until all bases are covered, buyers will want to take plenty of time to consider whether the device will truly meet all of their needs before rushing out to their local stockists.

If you’re considering Changing to Microsoft’s Surface Pro 3, why not find out more from us…