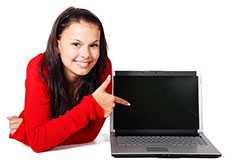 Smartphones and tablets tend to dominate the discussions in tech circles these days, but the traditional computer is far from ready to roll over.

In August 2014, research firm NPD DisplaySearch reported growth of one per cent in global laptop shipments – nothing to write home about, you might be thinking, but after years of gradual decline, it’s actually a pretty big deal. It means that optimism in the sector is rising – albeit slowly – and the responsible manufacturers are looking ahead to an exciting 2015.

With the benefit of portability comes one major obstacle: power. Laptop batteries are, of course, better than they’ve ever been, but manufacturers are still searching for new ways to help users keep their devices alive. In this regard, the prominence of wireless charging will grow substantially in 2015, with Intel in particular set to unveil some impressive table-charging technology.

The cable cull doesn’t stop there either; we’re likely to see a range of improved connectivity options, allowing users to share content between other devices much more easily.

Security is another primary concern, and it will be addressed with the introduction of more reliable biometric technology. Expect to see better fingerprint scanning and facial recognition technology.

On top of all this, there are all of the changes you might have already been expecting. Devices will become thinner and lighter, yet more powerful. This will no doubt be helped by the introduction of Intel’s latest i3, i5 and i7 processors, not to mention Windows 10, of course.

The laptop market is certainly a busy one, so picking the right machine might seem like a daunting task. To make things easier, we’ve handpicked some of the best options for you.

Chinese tech firm Lenovo has a knack of providing laptop buyers with great devices at budget prices, and the IdeaPad Z50-70 – one of its latest releases – is no exception. The specs on this 15-inch notebook lift it above most of the other options at this end of the market, so it’s well worth considering if you’re working to a tight budget. Firstly, there’s a full HD 1920 x 1080 display complementing an nVidia graphics processor, a premium-feel metallic trim and a fourth-generation Intel i3 chip – all making it quite the steal at £379.

Budget laptops are rarely pretty things. In their attempts to keep costs down, manufacturers often sacrifice aesthetics in favour of performance. Acer has bucked this trend somewhat with the Aspire V 13. This ultrabook-style machine stands just 20mm above table level, and hits the scales at just 1.5kg. The specs look good too; again, there’s an Intel i3 processor, 4GB of RAM and a 500GB hard drive. Pick one up in white and you may be able to satisfy that Apple design craving for around half the price of a MacBook Air.

Is it a tablet? Is it a laptop? Microsoft is calling it both, and providing you pay the extra for a keyboard cover (it doesn’t come as standard), there’s little reason to doubt its claims. There’s been a lot of hype around the Surface Pro 3, and in all honesty, there’s substance behind it. The basic version of the 12-inch slate runs on a full version of Windows 8.1 and is powered, once again, by an Intel Core i3 chip. Pay more, though, and it’s possible to upgrade to an i5 or even i7 processor. As portability goes, this really can’t be beaten and while the top spec version costs a cool £1,649, the 512GB HD and 8GB of RAM mean that it can more than hold its own in the ultrabook market.

Samsung’s decision to stop selling laptops in Europe came as a bit of surprise back in September 2014, but if there’s any reason to go through the hassle of importing hardware from Asia or the US, it’s the 2015 ATIV Book 9. This 12.2-inch ultrabook is about as good-looking as computers get, with a height of just less than 12mm and a luxurious aluminium body. It also weighs just 0.9kg, making it slightly lighter than its biggest competitor, Apple’s MacBook Air.

Performance specs are impressive too, with a 2560 x 1600 display, and 256GB SSD. Those who want more than the basic 4GB of RAM, however, will need to stump up a little extra cash to get hold of the 8GB model.

What laptop list would be complete without an appearance from Apple? The Californian firm’s latest high-end machine was actually first released at the tail end of 2013, but a major new update has put it firmly back into the spotlight as a great option for 2015.

All of the design and build quality we’ve come to expect is present across the range, with a slick aluminium finish and a variety of well-placed ports and buttons on each model. At the low end of the price range is a 2.6GHz dual-core Intel Core i5 processor, and at the top a quad-core i7 chip. Add to this 8GB or 16GB of RAM and performance will never be an issue. Of course, you’ll pay a premium to become part of the Apple club but there’s little doubting that this machine is up there with the best available this year.

So there you have it – these are some of the best machines available to buy today. Before exploring your own options, think carefully about what it is you need in a laptop. What will you be using it for? How much do you have to spend? Once these questions – and a few more – have been answered, you should be ready to make the best possible investment.

If you’re considering changing your laptops, why not let us help you make the right decision…