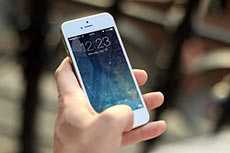 The faster you can enter information into your smartphone, the more productive you’ll be when working on the go. This is why employees may need to focus on improving their mobile typing speed

Walk into a standard office and you’ll still probably hear the tapping of traditional keyboard tiles as staff type away at the machines in front of them. That said, workplace productivity no longer starts and ends at the desk. An increasing number of employees – with the backing of their organisations’ bosses – are working on the go whenever possible.

The smartphone’s rise to prominence has obviously played a key part in this shift, with employees regularly turning to their Android and iOS devices to tick tasks off their ‘to-do’ lists. The tech on offer here is a little restricted when compared with the conventional computers that fill most offices, but there are ways of maximising productivity. Touchscreen typing speed, while often overlooked, is a prime example here – but how should you go about improving your own skills? Here are a few tips to consider.

Take the time to learn (again)

First of all, don’t let the QWERTY layout fool you – touchscreens and physical keyboards are two very different beasts. While the skills you’ve spent years acquiring in front of your home and work computers will come in handy, they won’t be enough to help you reach peak productivity levels, so take the time to re-learn and develop your mobile dexterity.

To this end, apps and tools such as Typing Tutor (Google Play store), TapTyping (iOS) and TypingWeb (web-based) are all worth considering. There are also a few games out there, for those who think they’d benefit from a competitive edge to their learning.

Whatever device you’re using, it probably came with its own on-screen keyboard. That’s not to say it’s the best option for you, though. Take a look at Apple’s App Store or the Google Play marketplace and you’ll find plenty of alternative programs to consider. Android users will find themselves with a few more options than their iOS counterparts, but the most popular examples – namely SwiftKey and Swype – are available on both platforms.

These apps might cost a few of your hard-earned pennies to download, but you’ll quickly earn it back in saved time. After all, these programs have been specifically designed with efficiency in mind.

Have faith in predictive text

It’s normal to hear people talking negatively about predictive text; you’ll even find fun-poking articles online about the ‘most hilarious predictive text fails’. In all truth, though, this technology can be hugely effective.

In the past, T9-based systems would use an algorithm to pick out and suggest words that resembled something similar to what had been typed in through the keypad. Nowadays, programs tend to be a little more sophisticated, with the most popular options able to offer up suggestions based on the individual user’s history. So, if you tend to open messages with ‘Hi there’, the keyboard will automatically give you the chance to insert the word ‘there’ as soon as you’ve typed ‘Hi’ – magic!

Find out how EC-MSP can help your productivity!