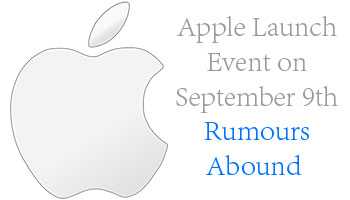 As was widely expected, Apple have confirmed that their next big product launch will take place on the 9th September in San Francisco. There has been no definitive confirmation as to what will be announced as part of that product launch in less than two weeks’ time, but since the date was confirmed rumours have been spreading like wildfire about what could be included.

It is largely assumed that the major part of the launch will be taken up by the announcement of a new range of iPhones, including an iPhone 6S, iPhone 6S Plus and iPhone 6C. The 6C version may not be a part of this particular launch but if it is, it is expected to be a slightly cheaper iPhone with a friendlier and more colourful exterior.

The iPhone 6S and 6S Plus versions are expected to feature more wide-ranging and notable changes however, which people have been excitedly debating ever since the launch’s date was confirmed. These change and upgrades are thought likely to include an improved 12 mega pixel camera, an enhanced processor, all of the software additions from iOS 9 as announced in June and animated wallpapers similar to those featured on the Apple Watch.

It is also widely believed that the new handsets are set to include so-called ‘Force Touch’ actions, which can be triggered by a hard press of the touch screen. If that ‘Force Touch’ is included amongst the features of the new iPhones launch in September, it is also possible that Apple may launch an updated range of Macbooks also with ‘Force Touch’, in order to unite all of their product ranges.

Some commentators also believe that a new range of iPads could be part of this launch but the general consensus is that those products will be announced separately in October. What almost everyone agrees upon however, is that the 9th September event will see the announcement of a new Apple TV device alongside the new iPhone range.

The internet has been abuzz with talk that that new Apple TV device, if it is indeed launched, may have Siri built in to its remote control. That rumour has been gathering pace in the last few days in response to the invites for the event that Apple have sent to the media, and which simply feature the tagline ‘Hey Siri, give us a hint.’ Siri however, has been in no mood to do any such thing, with its response to that exact query being a contextual and humorous ‘we’ll just have to wait until September 9th’.

Waiting is exactly what any Apple fan who is excited to see their latest offerings will have to do then, with the launch event at the Bill Graham Civic Auditorium in San Francisco sure to draw plenty of global attention. The auditorium will be filled with up to 7000 members of the world’s media, who will surely eagerly report the contents of the launch, but any fans who are desperate to learn the details as they’re announced can watch the event live as it will be streamed on the Apple website and via an Apple TV app.