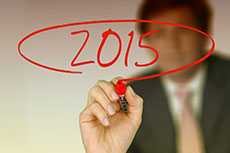 Another year is almost over, which means that 2015 is just around the corner. Many businesses would say that 2014 has been a positive year for them, as the economy has truly started to recover.

Instead of focusing on saving money and cutting back, businesses have started to shift their attention back to investment. Things are already starting to look positive for 2015, so what will next year bring for businesses?

Despite the Eurozone’s deteriorating economic prospects, UK businesses will continue to do well and grow further in the first half of 2015, according to a Business Trends report by BDO LLP. In November, businesses’ orders remained steady at 103.2, therefore GDP growth should stay above the 2.25 per cent mark the UK has enjoyed for quite some time.

Of course it’s difficult to predict how things will change in the second half of 2015, but the first half looks positive for the time being.

Around 42 per cent of consumers will own a smartphone by the end of 2015, Forrester believes, meaning your customer’s expectations will change. If you cannot understand what they want, and deliver it when they want it, these always-connected customers will abandon your business and take their requirements to a competitor instead.

Smartphones are even beginning to replace the World Wide Web, as more time is now spent on mobile apps than on internet browsers. Businesses will need to work hard and change their technology offerings accordingly if they are to keep up with ever-changing consumer habits.

We all know that 2014 was a bad year for data breaches. Sony Pictures is the latest firm to fall foul to hackers, and this negative trend is set to continue into 2015. Forrester estimates that 60 per cent of enterprises will find a breach next year. It also believes that security budgets will grow in an attempt to prevent these breaches, but in fact, it is highly unlikely that this will result in increased security.

What businesses need to focus on is fixing the way it responds to such a breach. Just over a fifth of enterprises have made it a critical priority to improve their incident response measures. Despite this, some companies are still looking to get ahead of their competitors by putting the protection of customer data first. Around a third of security decision-makers currently see privacy as a competitive differentiator and by the end of 2015, a figure that will rise to 50 per cent, Forrester predicts.

There are certain to be challenges to overcome in 2015, especially in terms of mobile technology and security, but things are looking positive for UK firms on the whole. Organisations just need to ensure they get their priorities straight and appeal to what customers really want; otherwise they’ll lose out to their competitors.

How prepared is your business for 2015!

We offer a FREE 2 hour review on your IT systems.
Simply fill out the form below and one of our engineers will happily arrange an appointment.