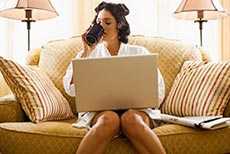 While it’s not always talked about by employees themselves, there are few trends that have had a bigger impact on the modern workplace than bring your own device (BYOD). While most company bosses see this mobile revolution as a way to boost the productivity they would normally achieve in the office, suggestions that conventional ways of working are slowly disappearing are beginning to surface.

Anand Krishnan, head of Microsoft UK’s developer platform, is the source of one such prediction. He thinks the need for workers to congregate at a central location each and every day is now obsolete. Now, this isn’t exactly true just yet, but the latest figures from the Office for National Statistics (ONS) suggest it could be before too long.

According to a report published at the start of June, 4.2 million Brits worked from home during the first quarter of the year – 13.9 per cent of the country’s entire workforce. This is the highest proportion on record. So why is it happening?

Well, not everyone likes to go to work – that’s one answer. There’s a lot more to it than that, though. Consumers like to keep up with technology, and most are better at doing so than the companies they work for. This is why so many of the UK’s businesses are still relying on the 13-year-old operating system that is Windows XP.

The devices that make up this colossal BYOD shift are, in most cases, generations ahead of the ‘official’ machines their owners are expected to work on in the office.

Of course, the whole mobile working concept can be hugely beneficial but there are security pitfalls to avoid. This is why properly governed office working still has a big part to play, and if IT bosses want to keep things under control, they must ensure that employees have the technology they need to be effective in-house as well as out.